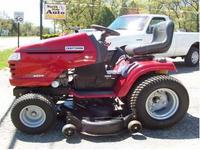 This lawnmower is a Craftsman DGT 4000 riding mower sold by Sears. It is powered by a 27 hp kohler engine, and has a 48" cutting deck.

The mower has ample power and rides fast enough to mow over two acres in a little over an hour and a half.

I have had no problems with the engine of the mower, starts easily, runs smooth, and have owned it for a little over 3 years now.

The only complaint about the mower is that the cutting deck becomes misaligned easily, requiring it to be adjusted for an even cutting of the grass.

When the deck is misaligned, it tends to cut deep into the grass on one side and leave the grass longer on the other side, requiring the grass to be recut for an even look.

Hitting even small tree roots hidden by the grass has caused the deck to become misaligned, roots small enough that you would figure the mower would not even hit.

The mower has enough power to tow a small trailer behind it, as I have installed a trailer hitch to the rear in order to move trailers and other stuff around my property.

Overall, I would recommend the Craftsman DGT 4000 mower to someone who has a large, open property, as it has a fast cutting speed and the potential to be a useful tool in the moving around of trailers and other items in the yard.

As long as you avoid tree roots, the deck stays aligned well, and should not cause any problems for the user.