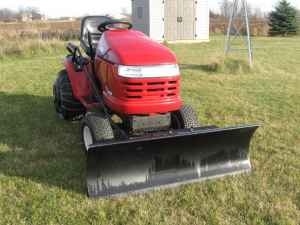 I purchased this Craftsman 5000 Excellerator in April of 2010. After 5 hours of use the belt started coming off. I won't start bashing the 1-800 number service desk but I will say I don't think a few of them even know what a lawn mower is... Maybe they don't have them in India. :-)

They wanted to ship me out a new belt because they thought this one had stretched (after 5 hours of use???) I wasn't buying that considering it has a belt tensioner. I took the cover off that protects the pulley and was SHOCKED to see the top portion of the pulley had sheared off... Unbelievable !!!!

Next, they were going to send out a technician to fix it; however, it was going to be 3 weeks. I informed them that in the Great state of VA you have to mow the grass every week during Spring and Early summer and I could NOT wait that long. I called the store salesman and he had never heard of such a failure and said it must be a part defect (duh) and I could get a brand new mower.

I got a new mower that week and they picked up the old one. I used the 2nd Craftsman Excellerator GT 5000 for a total of 5.4 hours before another pulley broke. This time I was mowing (my 1.5 acres) and it started making a horrible sound which the neighbor guy heard immediately but I did not since I was using ear plugs. This time it was a pulley on the other size and it appeared to be have been reamed out in the middle which allowed it to wobble and vibrate.

I purchased this mainly because my dad has had good luck with an older version of this mower. He has only replaced the battery in the last 6 years of heavy use 2+ acres... I'm done with Craftsman until they can get their quality under control. I'm going to try my luck with Husqvarna.

BTW, this is the first Review I've ever taken the time to write.

I would NOT buy a Craftmens Excellerator GT5000.