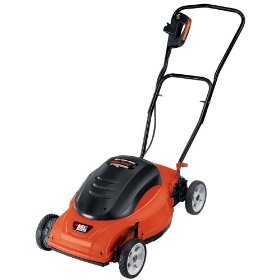 When I bought my townhouse, it came with a normal townhouse-sized yard. I assumed electric would be the best route for a townhouse, since the yard wasn't large and I don't have outside storage such as a shed. I was WRONG! There are so many things I regret about buying this electric mower.

First, it has very little power. Gas mowers spin the blade much, much faster and have a mechanism to help propel the mower forward. With the electric unit, you must push/pull twice as hard AND re-cut over the same spot at least twice to ensure you've hit the blades.

Secondly, the cord is VERY annoying. I originally thought it would be more annoying to fiddle with gas and occasional oil changes. Boy, do I miss the freedom of just being able to move anywhere.

Next, I still have to store it outside anyway! I thought it would be smaller and cleaner than a gas machine. It's very dirty and just as large. It can not be stored inside after normal use. Further, because it's stored outside now, I think it may damage more quickly in the elements than a gas machine would because it's simply plastic.

Last, it's more expensive than a gas unit! I assumed the electric would be the cheaper way to go.