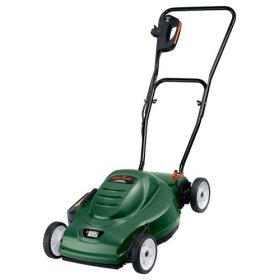 I love this mower so much I actually purchased it twice! The first time was in the early 1990s, when I lived in a rented house in Virginia with a postage stamp-sized front yard. As I remember, I paid about $135 for it and it did a beautiful job on my lawn.

We moved to another house with a much bigger yard and took the mower along. Several years later I moved into an apartment and didn't need the mower, so I gave it to a friend.

Then in 2004 I finally purchased a house, which has a big pie-shaped yard. We went to a local hardware store and I was thrilled to find the identical mower for $89.99, used.

I snapped it right up. The hardware man told me the previous owner had mowed over the electrical cord not once but twice, and at that point decided he'd better stick with a gas mower! His loss.

My husband used to mow lawns and repair lawnmowers as a teenager, in the 1970s, but now he has a pacemaker and is not allowed to work near large magnetic fields -- which means I do all the mowing at our house.

Like all the other Black & Decker products we have ever purchased or tried, this lawnmower is excellent. And now, with the rising price of gasoline, it is truly economical to operate. The only possible issue with the Black & Decker electric mower is that one must not mow through the power cord. The blade seems to stay sharp. I would only think about getting rid of this mower if I had so much property that I needed a riding mower.