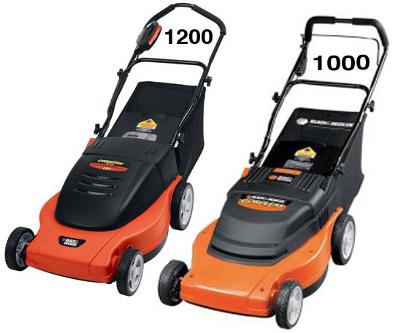 The CMM-1000 is an all electric cordless mower. I have no idea what, if anything, "CMM" stands for. I bought mine sometime around 1993. At that time all Black & Decker outdoor equipment was forest green and black. At some point they changed to the orange/black they use now.

I had good luck with mine. It was very quiet. It's battery lasted longer than I could stand to mow. I loved the fact that it never failed to start when I threw the switch. (Every last gas mower I have ever touched has failed to start on the first try, and the second, and usually the third...I hate gas mowers.)

There were two problems with it. It was built for short people. It says right in the manual that the operator should be no taller than 6 feet 2 inches. This was part of why I could not last longer than its battery. The second problem was that the battery weakened and finally died. When I went to get a replacement battery I discovered there had been a recall. Here is a link to the details:

Black and Decker Customer Care
The fix done under the recall replaced the battery at no charge. I never experienced the problem noted in the recall.

I liked this mower. I could mow during ozone restricted days. It would have been perfect if it had a longer set of handles to accommodate a tall guy.