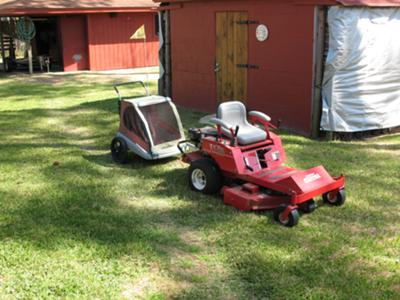 About four years ago I was looking to upgrade from the mower I owned at the time. I had been using a 30" Dixon for eleven years which was a zero turn mower, but it was not hydro-static, it used a cone and disk setup. It had given excellent service.

I attend a farm expo annually in Moultrie Ga and there are a lot of companies who bring out their full line to demo. I was attracted to the Country Clipper (Jazee One is the model I have) as it had a flip out deck which makes the blades very accessible and it also has a joystick control for steering. I was used to a zero turn mower so getting used to it wasn't a problem.

The second year I saw them at the Expo I came prepared to purchase one. I got an excellent deal on one and brought it home.

At that time of year (October) there isn't much mowing to do here, I usually just run over the lawn to clean up the debris.

It would be spring before I could see how it was cutting. I notice that it was cutting uneven, I could see a grove with each pass of the mower.
There is very little adjustment with this mower they say because of the flip up deck.

The only adjustment is a rake adjustment on each side, but going very far with either side will also effect the other side.

There is very little dealer support for Country Clipper in the Florida Panhandle. When I purchased it there were two dealers 50-60 miles away, but they have since jumped ship.

I did talk to the company on many occasions but that went no where. The distributer that was bringing the mowers to the farm expo where I purchased it has gone out of business.
My present situation is I am down for a broken belt.

The day I broke the belt, I was able to contact the regional rep and he set up a drop ship through a dealer.

No status as when to expect it.
I exhausted all attempts on line to locate a belt, but came up empty. It takes a 144" X 1/2 inch belt and no after market companies carry one that long.

As soon as I do get a belt I am unloading this piece of junk. Here are the things that have brought me to this. I don't like the deck design due to no adjustment. I would prefer a 2 blade setup over a three blade, it is only a 38" mower, don't know why they use three blades.
It does not maneuver around two foot trees without backing up and taking a second shot, so I guess I need something smaller.

I am dissatisfied with the company support and the lack of a dealer network in this area.
This mower has quality, but they messed up with the design. I would advise anybody to pass on this one. I am thinking strongly about a 34" Gravely.