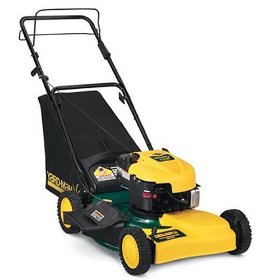 My lawnmower that I would like to review is the MTD- Yardman,which we acquired at Wal-Mart.We have had fair performance out of it but their has been one problem,that has been aggravating.

Now before I tell about the problem,I want to say that the problem might not be a mower problem but a terrain problem,as in that we have a rough yard.

But the problem has been with the belt that propels the mower(it is a self propelled walk behind)has broke three times in a relatively short time span.Now it might be the rough terrain or the mower I'm not sure which,although my brother-in-law who helped me replace the belt said that it looked like it needed more tension on the belt and that could be the problem.

He said it looked like maybe a spring was missing or had got lost.

Enough about the belt problem.Other than being kind of heavy it is an alright mower and so far has been depenable,easy to crank,stays cranked and does a decent job cutting grass.

I don't think I will buy another one,although so far other than the belt problem I havn't had any other problem.Oh one thing I failed to mention,It don't seem to run very fast and don't have the pull of other self propelled mowers that I have used in the past.In closing I feel I need to disclose some feedback that I have got from other people that have purchased a Yardman.One person after using his Yardman for a somewhat short time had problems with the motor,the ring in the motor went bad.Another individual that I know also had pmotor problems,the carborater weent bad,

These are individuals that I am close to and I trust that what they have told me is true.It is unusal to have problems with a Briggs and Straton engine which is the engine that is on a Yardman,but these individuals have experienced these problems.