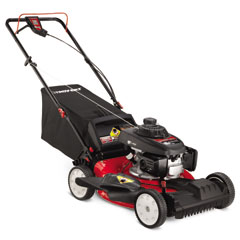 This was my first self-propelled mower and I was very satisfied overall with the mower until it broke.

The Good:
I was very impressed with the Honda 160cc engine. It was very quiet and seemed to have more than enough power to propel the mower and take care of the yard. The variable speed control was easy to use and worked well. A lever placed next to the starter handle made controlling the speeds easy. Basically, squeeze harder to go faster. It was a little awkward in tight spots, though. I liked the front wheel drive because it made pivoting on the back wheels a breeze without having to be in neutral (the mower has to be in neutral when pushing or pulling without the self propel (this is as easy as letting go of the lever)). I never got around to using the bag or mulching, but the side discharge worked great. The ability to attach a water hose to the deck for cleaning was great. It made cleaning a breeze, and I will probably never buy another mower without one. The system started with great ease using the auto choke. You simply slide the choke lever over and pull the starter string. I was actually just pulling on the string to test the resistance and it started! That is how easy it was to start the engine.

The Bad:
Unfortunately, after two mows the mower began leaking an oily fluid out of a little black box between the two front wheels. I assume it was some sort of transmission fluid. It seemed the mower then started having trouble going into neutral (the wheels seemed locked). I did not want to take the mower back as I really liked it and it was less than a month old; so I called Troy Bilt for advice. The wait time was about ten minutes when I called at about 4:00 P.M. EST. The service representative was courteous. He took my information and directed me to a repair shop in my area, and advised the repair would be covered under warranty. After calling the repair shop I was told the turn around time for mower repair would be one month. I could not be without a mower for a month so I returned it to the store from where I bought it (Lowes). It was too bad because I really liked everything else about the mower. I would recommend it if I could be assured of the quality but it scared me away from trading it in for another one. If it had broken a week later I would not have been able to return it (because of the store’s return policy) and I would have been stuck waiting a month.

Join in and write your own page! It's easy to do. How? Simply click here to return to Troy bilt Lawn Mower Consumer Reviews.