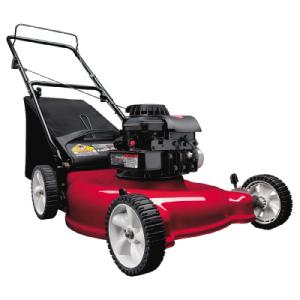 I did not have a good experience with this mower. I bought it an paid a lot of money for it. It was way way to expensive for the quality.

I had it assembled for me by the store I bought it from so I wouldn’t mess it up. I got it home and I went to mow and it didn’t start. So I called the store and asked them why and they told me that sometimes I have to pull on the cord a few times to get it to start up.

So I tried to pull the chain and it sounded like it was trying and then choked. Nothing. So I brought it back to the store and switched it out and I get the new one home and it worked… for 3 weeks then it choked When it did work it was very choppy (and not in a good way) It leaves patches of uncut grass.

The bag catcher worked fine though. The problem I had with the last one I had was that frequently the air pushed the clippings out of the bag even when it was empty and this one does not do that. I am not impressed with this model. I would only recommend this to someone if they can get a good deal on it. ($50 or less)

PROS
- Its light weight. I was able to push it easily, even with a broken wrist.
- The bag catches the clippings very well. No residual spilling.

CONS
- Its not a good quality machine. Both of the ones I got were bums. I believe lighting does not usually strike twice.
- It does not cut evenly as described. Half the time it didn’t even cut and I would have to walk back over it to get what was not cut.

Join in and write your own page! It's easy to do. How? Simply click here to return to Yard Machine Lawn Mower Consumer Reviews.